Mass Exodus – The Downside of Rapport

You may not have noticed this, but anyone trained to run a workshop is aware of this dynamic. You may think it’s because it’s 10am and everyone has had enough coffee, but that’s not it.

I have written before of this concept called “rapport.” Humans like to be in rapport. It’s pretty unconscious. We like to be connected. Humans usually are in rapport. There is physical rapport and there is the kind we create by the ways we talk to each other and the things we talk about. Rapport occurs when you meet someone in a coffee shop and you say, “It’s really hot out.” And it is really hot out. Rapport makes your brain say “yes.” If it is really hot out then you feel on some unconscious level a little more connected to the person you are talking to. We humans reach for the feeling of connection (even those of us who don’t think we do). And so we do little things such has talking about our children when someone else is talking about their children. Or talking about golf with someone who loves golf. We look for commonalities.

Rapport is achieved physically as well and if you look around any room you are sitting in, you will see little pockets of people sitting similarly. 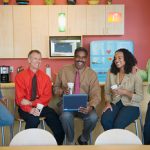 You might hear people speaking in a similar tone of voice. Rapport is a useful thing. When I teach persuasive communication, we talk about the fact that you cannot sell anyone on anything until you have rapport with them. But once you have rapport with someone, selling them on your idea becomes much easier.

That’s all the good news.

Here’s the not-so-good news. Rapport is unconscious until you learn these skills. If you are in rapport with a room full of people and one person gets up to get a cup of coffee, you will suddenly realize that you really need a cup of coffee. 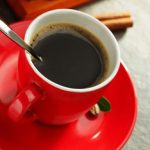 Or you will just feel a bit of a pull to get up. That’s the power of rapport. You are connected to that person and she has made you realize you want coffee. Or tea. Or just to get out of your chair. It does not always happen. It doesn’t happen for everyone. Some people override it. Those people who are very interested in what they are hearing may not get up just because others do. But the more people who get up, the more who will follow. And it only takes one person to start it.

The best way I can describe the downside of rapport is the concept of mass exodus. We organize teams to get things done. Very little can be accomplished without a group of people being involved. There are organizations where on-going involvement is not always easy. This is true of both corporations and non-profits. It is true of volunteer and non-profit organizations maybe more because they typically ask for a lot and do not return as much. In these organizations, people are often on the edge of what they can take already. So when one person leaves because perhaps her child is sick and needs ongoing care and another person leaves because she wants to move out of the country and then a third person leaves because she is vocally angry with the organization, suddenly everyone begins to wonder if they should leave. And they don’t ask “why are these people leaving?” They heard one person say “I am leaving because this organization is dysfunctional in a variety of ways” and because there is a rapport, there starts to be a belief that everyone is leaving because the ship is going down, even though each person had their own reasons for leaving. But it doesn’t matter. Some of these people question the organization already. And though they love it; though they are dedicated; though they are willing to stay if everyone else stays, they unconsciously begin to believe that everyone is leaving. Everyone. Not just three people. And that they all have the same reasons – because something terrible is happening. 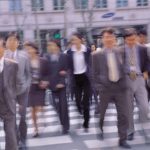 This is the downside of rapport. If we are in rapport with a group of people, we tend to leave when they leave. And even in a corporation, what you want to watch for as a manager is the vocal person who leaves because everything is wrong and a few other people leave quietly for entirely different reasons. You will want to say something to interrupt the exodus. If I am running a workshop and I see people starting to get up, I might say, “I can see that you are needing to get up; if you will wait, we are going to take a break in 10 minutes.” Or I will say, “I see some of you need a break, but this part is important to hear.” Something simple that acknowledges what is happening and makes people conscious of what their choices are. This helps them not act unconsciously solely from rapport.

Here are the lessons:

1. When you see something happening in your group or organization and you assume everyone is doing the same thing for the same reason, ask. Ask people what their reasons are.
2. Understand the effect your actions have on groups of people who are in rapport. Be conscious and intentional about your actions.
3. If you are a manager, watch for the exodus and interrupt it. Talk to the rest of the group about why certain people are leaving. If people are leaving for personal reasons, ask them to announce that. You can break up the experience of rapport by naming it and then showing that not everyone is doing the same thing.

What does it mean to be a leader? In their book The Art of the Possibility, Rosamund and Benjamin Zander describe a concept that he calls “leading...

END_OF_DOCUMENT_TOKEN_TO_BE_REPLACED

Self-Care: The People in Your Head

Note:  In my ongoing series on COVID self-care (see Taking the Stairs and Now More Than Ever), I am addressing an element of self-care that is often...

END_OF_DOCUMENT_TOKEN_TO_BE_REPLACED

Friday was a good day. Living in Northern California, I have been waiting for clear air (or at least not “unhealthy” air) so I could go outside...