I just stepped off an international flight. It was long. All told, two planes – 17 hours beginning to end. And, it was so enjoyable. There was a time not long ago that I distinctly did not like flying. I had a friend who spoke all over the country and he said to me once, “I love stepping onto the plane; it’s like stepping into a pod of silence. I have no electronics and I sit and think and read and sleep.” And I thought, “I wish I could feel that way.” I hated to fly. And why? Well a variety of reasons, but mainly it scared me. It wasn’t terror; but it was a fear that, while it did not stop me, made it distinctly less enjoyable to travel. And I love to travel. When I flew, my mind would obsess on all the things that could go wrong and what it would be like to be in a plane crash.

So what happened to change my experience? The short answer – I don’t know. But I thought about that on my first 9 hour flight as I looked out the window so happy to be in that seat in the air at that time. I did not wake up one day happy to fly. It was a gradual process. I cannot even tell you for certain what the steps in the process were. It may have included my reading the book, Outliers, Malcolm Gladwell, where I learned that at least seven distinct things must go wrong at one time for a plane to crash. But, I didn’t change that day. I was not suddenly ready to get on a plane.

It could be partly that I learned to meditate and how to train my mind to focus on certain things and not on other things. But I have meditated for many years and often on a plane while still in a great deal of fear.

In the end, as I look back, I think the best answer is this — I decided. I decided to change my mind about flying. It did not get better right away. It was a gradual process. 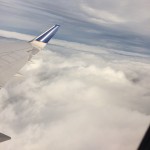 I notice with so many of my clients, they decide to change things. And then almost immediately they become impatient – impatient with the circumstances, impatient with themselves. “It’s not changing fast enough.” “I am not doing enough.” They want it to be easy or quick. Sometimes it is, but often change is a gradual process.

Let’s take the busy attorney who decides to improve her time management. But she is so far behind that she is frustrated and stressed and nearing the end of her rope. She makes one change. She hires a coach and decides with her coach that she will write down everything she does every day to see where changes can be made. Next week she comes to her coaching call and says, “I only did it two days and not even entire days.” And she feels too busy to implement the change and she feels frustrated with herself, her job, all of it. There is a voice in her head that says, “this will never work.”

Coaching helps her to find some patience with herself, to try it again, or to try something else. She comes back next week and she says, “Okay; I did better. I tracked my time, but nothing changed.” Now she is frustrated that this thing she tried “didn’t work.” But let’s look. Every change you make in a system changes the system. Maybe this practice forced her to slow down. Maybe it caused her to not do something that was a time-wasting behavior and she hasn’t seen that yet. Maybe it has caused her to do one thing at a time and to become moderately more efficient. She does not see it, but things are changing. Little by little. Every change you make changes the system.

That one conversation you have with your child or your spouse where you ground yourself and you don’t yell may seem so insignificant, but it has changed the nature of your relationship. Next time maybe they approach you with just a little more openness. Maybe it is not discernable, but it is there.

Much of the process of change is invisible. But that doesn’t mean it is not happening.

So here’s your process: (1) Make a decision what you want to change. (2) Take concerted action. Keep taking action. Do not stop taking action. (3) Move forward step by step – one small step at a time. There are no steps that are too small. (4) Do not quit – keep going. (5) Notice the steps you are taking. Acknowledge yourself. You may not see the progress as big obvious changes in your life now. But check back in a month or a year and see what you have created. This is how we change.

“Just because you can’t see it, doesn’t mean it isn’t there.” –attributed to various sources

The Courage to Change

This post is in honor of my clients, past, present and future. So that you know I know how tough it can be to be striving toward your deepest...

END_OF_DOCUMENT_TOKEN_TO_BE_REPLACED

Empowering Yourself to Make Sustainable Change

Empowering Yourself to Create Sustainable Change On Tuesday I spoke to a group of Sacramento small business owners and entrepreneurs on the topic of...

END_OF_DOCUMENT_TOKEN_TO_BE_REPLACED

Taking a Stand to Create Change