How Interpretation Affects Communication (From “Coaching for Attorneys”) 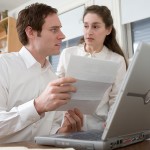 Ms. Jones is telling her associate, Bob Smith, about something that happened in one of his cases. Following is the type of feedback loop that occurs in most conversations when the parties are not tuned in and practicing effective listening:

Ms. Jones: Bob, the way this case was handled did not work out well for the client or for the firm.

[Bob Smith hears]: You are about to get fired. You really screwed up. [As a result of his interpretation, he says]: Well, you know it was really Sally who did the majority of work on the case.

[Ms. Jones hears]: This was not my fault and I am not going to take responsibility for it. [So she says]: Okay, I’ll go talk to Sally [thinking, “Bob is not reliable and willing to take ownership for what happens in his cases. That could be a problem.”]

How would this conversation be different if Ms. Jones and Bob Smith had training in how to listen?

Ms. Jones: Bob, the way this case was handled did not work out well for the client or for the firm.

Bob Smith: I am wondering, when you say it “did not work out well,” what do you mean?

Ms. Jones: You know, it just didn’t bring in the kind of money we were expecting and the client is disappointed about this as well.

Ms. Jones: That is true.

Bob Smith: I am curious what you think our next steps should be?

Notice in the second example, although Bob Smith might still have had some initial fear that he had made a mistake and that the firm and the client were mad at him, he set that aside and appeared to Ms. Jones as curious and collaborative. And the result was different than he expected. Also, there is a saying: “What we fear we create.” This is based on the principle that we interpret situations in such a way that we often see what we expect to see. In the first iteration of this conversation, Bob’s fear was that he had made a grave mistake. Because that fear was so strong, he interacted with Ms. Jones in a way that caused her to see him as irresponsible and not accountable for his results. His fear of getting fired actually led her in that direction. Had he been more curious, as in the second example, he might have found out that things were different than he feared.

Communication – Turns out it’s not About the Nail

Want to learn to be an effective communicator?  This video says it all.  I know you see the problem.  I know it is crystal clear to you and not at...

END_OF_DOCUMENT_TOKEN_TO_BE_REPLACED

Dealing with Communication Breakdowns Part IV:  Problem-Solve This is the final in a four-part series on clearing breakdowns in communication. If...

END_OF_DOCUMENT_TOKEN_TO_BE_REPLACED

Dealing with Communication Breakdowns Part III: The Process “The best way out is always through.” ~ Robert Frost Summary of the process: 1. Manage...